Home > Be BodySmart > Energy & Performance > 10 foods for your brain

10 foods for your brain

Did you know that what we eat can help our brains to function properly? Here are our top 10 foods to include in the diet to support a healthy mind: 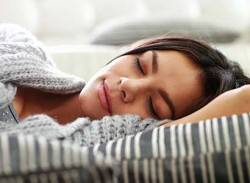 Sleep is one of the cornerstones of good health and helps to refresh the mind and repair the...

Insomnia can be acute, lasting from a single night to a couple of weeks, or persistent, lasting at least three nights a...

A person with social anxiety usually fears and avoids a range of situations such as crowds and...